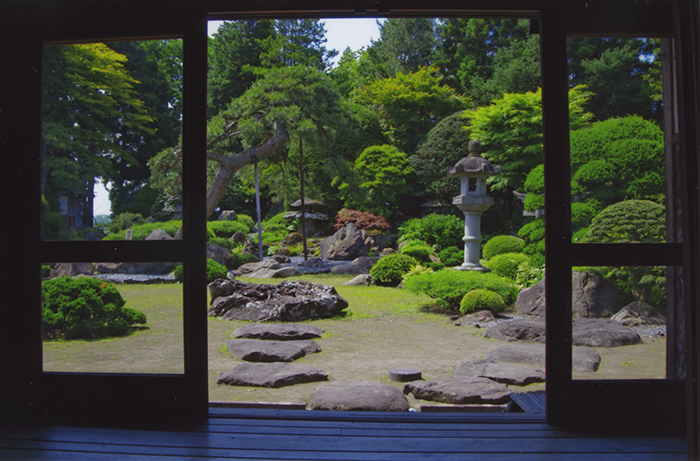 Zuirakuen, a dry garden (karesansui) in Oishi Bugaku Ryu forms a part of shoin architecture, which originally served as the residential home of Miyadate Area’s wealthy farmer, Tsushima Family. The garden took two rounds of landscaping works before completion.
The first round took place in the spring of 1890 until the fall of 1905. Teizan Takahashi, the leading landscaper in the school of Bugaku Ryu, initiated the work. His two pupils, Teigetsu Ikeda and Teiyo Tonosaki, resumed the addition and modification works in 1928, which finally ompleted in 1936.
In the wide space created in front of the shoin style building, two large steppingstones are arranged with a wide gap in between,
which is almost impossible to cover in a stride without hopping.
Further inside, the garden features a dry fall, a dry pond and a stone bridge across the pond. A low miniature hill at the far back on the right side and a taller hill at the left side, along with spontaneously arranged large rocks and stone lanterns altogether embody the quintessence of Oishi Bugaku Ryu.
Visitors can also find a stone monument describing the origin of the garden in front of Inari (goddess of rice) shrine at the right back of the garden. Design drawings respectively created by the three landscapers, Teizan, Teigetsu, and Teiyo, are also kept at the site.

It is said that Oishi Bugaku Ryu is an extraordinary and valuable gardening technique
which honors worship and purity, that is to say, the rock arrangement shows the
dynamics of rock as a feature of garden and Mt. Iwakisan is included as the natural
scenery around it and so on. In Tsugaru region, the gardening technique called Oishi
Bugaku Ryu became fashionable since the late Edo period.
As for its origin, there are various opinions, that is to say, that Lord Tadanaga KAZANIN
transmitted it to Tsugaru in the Edo period when he was exiled there or that the lord of Tsugaru dispatched Teizan Takahashi, a guard of garden in the domain of Tsugaru, to Kyoto and so on. After that, the second generation and the third generation of Teizan, Teiyo Obata, Teigetsu Ikeda and
Teiyo Tonosaki,etc. played active roles in it and the genealogy of the horticulturalist family from the last days of the
Tokugawa regime to the early Showa era has still now continued for a very long period.